Explore The Cultural Magic And Celebrations of Cavtat Croatia 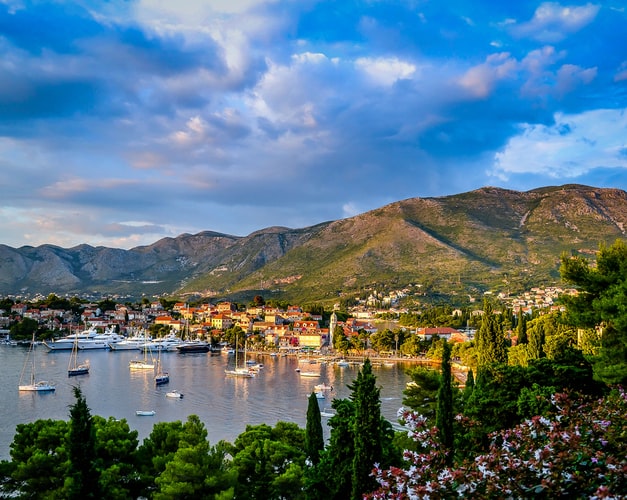 Cavtat, Croatia
I touched down in the picturesque city of Dubrovnik, Croatia with the intention of satisfying my newfound desire for immersion in foreign culture. I was determined to remain as spontaneous as possible, so I had no plan beyond collecting my luggage and getting through customs.

The first thing that became apparent to me was the heat – the Croatian summer is not for those who struggle with high temperatures or humidity. Fortunately, I was prepared for this with suitable attire, plenty of sunblock and my trusty bucket hat.

There is nothing quite like the experience of arriving in a new country and hearing the foreign cadence of the native tongue buzzing around you. It is at once mesmerising and somewhat overwhelming. The Croatian language is rather lovely and unique – it mirrors the landscape and surroundings in its complex yet pleasing beauty.

Once clear of the airport chaos, I sought a café to replenish my waning energy with a local coffee. When I was halfway through my second cup, I met an exceedingly friendly local couple who insisted on giving me all the information I would need to enjoy the Croatian summer.

As I soon learned, summer in Croatian towns is laden with cultural festivities. Most of the coastal towns take great pride in their diverse summer celebrations and performances. After exchanging information with my new guides, I resolved to hop on a bus to Cavtat – only a 30-minute trip from the city of Dubrovnik.

I found myself wishing that the bus journey would last a bit longer as my window seat gave me a spectacular view of the coastline. I arrived in the charming town and quickly located the nearest hostel as I was keen to start exploring. Once I was checked in and my luggage safely stowed, I hit the streets with a delightful feeling of anticipation stirring in my chest.

It was nearing evening as I noticed the streets begin to take on a livelier energy, but I still felt safe. The people were chatting excitedly, and I began to spot colourful face paint and elaborate costumes here and there. Eventually, I came across a large circle of people that were clearly enjoying some form of spectacle.

As I manoeuvred my way into the cluster, I was delighted by a group of skilled dancers who twisted and twirled in time to rhythmic drumming from two talented men.

The summer festival played host to a myriad of performers: from fire dancers to folk singers and everything in between. I had never been so enamoured by a cultural celebration. After wandering the streets and taking in the grand displays, I wearily returned to my hostel to catch up on some much-needed rest.

I spent the rest of my time in Cavtat snorkelling in the crystal blue waters and enjoying the summer festivities, which were as fun as if you casino slots chile. The locals and tourists alike were friendly and welcoming. If you find yourself at a loss for what to do from July to September, Cavtat would be top on my list of recommended destinations.